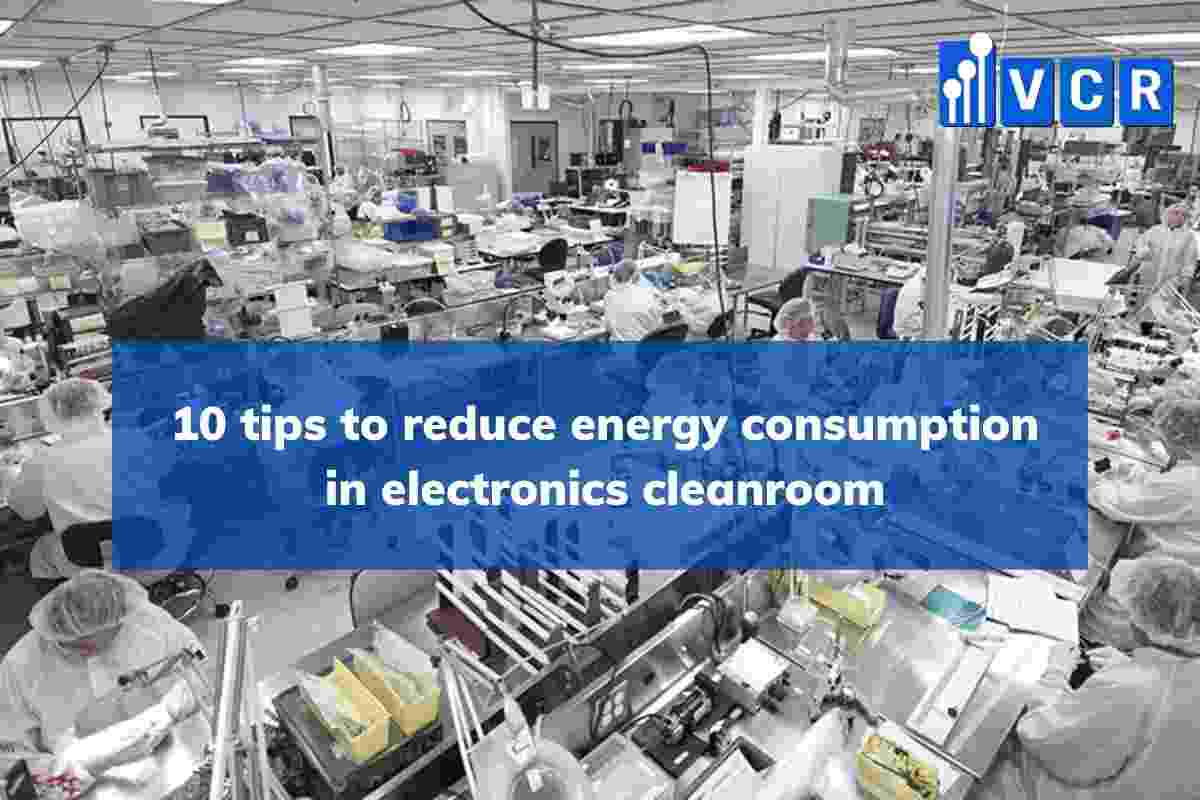 Electronic cleanrooms are full of microelectronic devices. These devices are characterized by low working signal voltage (usually only about 10 volts). The anti-interference ability is poor, and the anti-static requirements are high. During the operation of the equipment, the generated static electricity interferes with the normal working state of the precision instrument, resulting in data inaccuracy and unstable product and equipment performance.

Cleanrooms need to be built, largely because when designing and building factories, shortcuts are taken due to cost considerations, or because the scheme design is not professional, resulting in unreasonable factors.

Many cleanrooms are one-time investments, and the cost is quite high. High-efficiency design and high-efficiency equipment usually require a large initial investment cost.

Due to various reasons, there are many "small savings and large wastes", which are so-called shortcuts and cost-cutting result in reduced plant performance and increased energy consumption. Retrofits to established factories are often mired in pointless economic whirlpools. The return on investment for an upgrade is usually much higher than outright purchasing new equipment.

Most factory equipment refurbishments have a payback period of fewer than two years. That is to say, the return on investment is usually at least 50%, compared with 10% to 15% for investing in new fixed assets (ie, the payback period takes seven years).

These circumstances reduce the competitiveness of companies and the interest of investing shareholders.

In today's highly developed industry, clean room operation requires as much reform as product design. In this article, Vietnam Cleanroom will show you the 10 tips for new and existing cleanrooms to solve energy consumption as follows:

As a result, larger size air handlers, larger filters and coil area consume less fan energy, allowing the use of smaller fans and motors. The small fan adds less heat to the air, which reduces the difficulty of cooling. Coils with smaller thickness are easier to clean and work more efficiently, so the chilled water temperature can be higher. The filter works better and has a longer life in the case of low cross-sectional wind speed.

The LFV design reduces air and water pressure drop, reducing the amount of water entrained in the cooling coil. A streamlined design with few sharp corners reduces pressure drop by 10% to 15%. The LFV design can also reduce the voltage drop by a quarter. The goal is to reduce energy losses by at least 25% and reduce the size of variable speed fans. The optimal cross-sectional wind speed range is 250-450 ft/min, depending on usage and energy consumption.

2. The number of air changes

The flow rate is determined by the number of air changes per hour, which also determines the fan size, building configuration and energy consumption. The reduction in air velocity can reduce construction and energy costs while maintaining cleanliness. A 20% reduction in the number of air changes can reduce the size of the fan by 50%. Air cleanliness is more important than energy saving, but the latest research results have been documented to reduce cleaning costs. There is no consensus on the optimal number of air changes. Many of the principles are outdated and based on the old idea of ​​using inefficient air filters. Surveys have shown that the recommended air changes for ISO Class 5 cleanrooms vary from 250 to over 700.

A national laboratory in the United States is in the process of defining ISO Class 5 cleanroom standards. Studies have shown that actual air changes range from 90 to 250 -- much lower than operating code standards without compromising production and cleanliness. Therefore, it is recommended that the number of air changes in ISO Class 5 cleanrooms be about 200, with a conservative upper limit of 300.

The motor consumes most of the electricity in the cleanroom

Continuously running motors consume a lot of electricity each month. Properly improving efficiency and properly adjusting the size, after renovation, the economic effect is mostly good. Increase efficiency by a few percentage points, and profits can increase.

With a high-quality, efficient motor, it doesn't have to cost too much. High efficiency means minimal, try to minimize the load before changing the size of the motor. The use of variable speed drive (VSD) can improve operating efficiency when output varies.

Variable speed drive refrigerators can save a lot of energy and money.

Many cleanroom designers and operators believe that variable speed drive refrigerators are not necessary because the load is usually constant, and multi-stage refrigerator units usually control for high load operation. But refrigerators with a constant load usually operate below full load.

Variable speed drive refrigerators typically operate at 90%-95% of full load to save energy.

Multi-stage chillers rarely operate at high loads. Typically, site loads do not exactly match the power level changes of the unit. Many operators run additional chillers for reliability. Once a chiller fails, other chillers can be replenished immediately and take over its full load. Therefore, chillers often run chillers at 60% to 80% of their cooling capacity.

There are many studies and experiments that prove that variable speed drive refrigerators work very well. For more than two decades, variable-speed drive freezer manufacturers have produced more reliable products for use in new and upgraded clean plants.

Refrigeration systems are usually designed to withstand the maximum load. Regardless of whether the maximum load occurs frequently or not, the temperature of the chilled water in the refrigeration cycle in the process is determined by the extreme heat load that only accounts for a small portion of all loads. This is just one or two of many situations. This creates excess refrigeration capacity and inefficiencies under load. When the temperature of the supplied chilled water is low, the working efficiency of the refrigerator will also be low.

On average, each degree Fahrenheit increase in chilled water supply temperature increases chiller efficiency by more than one percentage point. If the load is divided to provide two different temperatures of chilled water, then the work efficiency will be higher.

High-efficiency cooling towers improve the efficiency of refrigerators by reducing the supply temperature of condensed water.

All cooling towers should work in parallel, and evaporative cooling will achieve the best effect when the surface area is increased. A typical cooling tower requires 100 watts of energy per ton of chilled water output from the chiller.

Many mission plants use multi-stage towers, which use single-speed or two-speed fans and divide the tower into different stages. One tower runs at full speed until the load exceeds it's capacity, then the other tower is turned on and it operates at a lower or higher power state.

This solution can result in large, incremental changes in cooling tower load, frequently falling below or exceeding the required rating, resulting in jagged energy consumption and reduced chiller efficiency.

Therefore, all cooling towers should work in parallel to achieve the best evaporative cooling with increased surface area. If more towers are operating at low speed, use a variable speed drive to adjust the speed of the fans as the load changes, and according to the "cube law", the fans can save energy at lower speeds.

Factories typically use a dedicated cooling tower to supply condensate to each chiller. This concept does not allow chillers to operate in parallel with cooling towers. Parallel operation of cooling towers is permitted only with the addition of common headers to the condensate system, regardless of cooling requirements.

Another "free cooling" option is suitable for systems that require constant chilled water and fan coil units, such as clean rooms. Free cooling technology directly utilizes cooling towers in low temperature or low humidity environments to produce chilled water, reducing or replacing the use of chillers.

Direct heat exchange with the processing load allows free cooling technology to utilize the higher temperature outside air (purification engineering) for several hours longer than the heat exchange time used in secondary or tertiary heat exchange systems. The temperature difference between the cooling water and the condensate water separated by the plate heat exchanger is close (eg only 2oF).

When the temperature and humidity are fairly low, the cooling tower can operate independently without fans. According to the psychrometric chart, free cooling is possible in many places for many hours of the year.

Many mission plants consume a large amount of energy to heat, while at the same time consuming more energy to remove "waste" heat from the process, without combining the two processes. The recovered heat can be used to preheat fresh air, reheat supply air, and other uses. AHU preheat coils can preheat outside air (and precool in hot weather) with wastewater.

Reheat coils can recover waste heat from an air compressor or chiller condenser return water while saving chiller energy and boiler fuel. Heat exchangers can exchange heat between different media that cannot be mixed or in direct contact.

The pump system flow of chilled water and condensed water varies greatly, and the chilled water and condensed water systems have minimum flow requirements, which are basically between 50% and 75%. According to the "cube rule", a small reduction in flow yields considerable energy savings. A 20% reduction in flow produces an almost 50% drop in pump power.

Properly run, this simple and reliable system can provide significant energy savings through changes in chilled water flow in the chiller. This technology is widely promoted by freezer suppliers and various professional associations.

10. The improvement of centrifugal compressor