One aspect of access control that is little talked of is airlocks. The principle is generally well under-stood. In its simplest form, the airlock is composed of two doors that are electrically interlocked in such a way that the two cannot be opened simultaneously. Airlocks are used in a variety of situations but in essence they are there to control the unwanted passage from one area to another.

Airlocks may be used to control the entry of personnel to a secure area such as a cleanroom, where dust or small particles may be a problem. Similarly if a constant temperature must be maintained then an airlock can be invaluable in reducing temperature fluctuations when doors are opened. 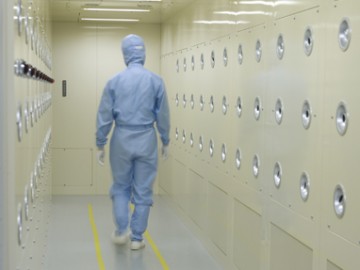 Restrictions on incoming and outgoing personnel can be essential

Historically, installation engineers have gathered together a few relays to construct crude means of controlling two doors. These systems are only suitable for the most basic of applications and cannot cater for modern technology, such as electronic door operators. They are also incapable of providing indication to users of the state of the interlock. But to adopt this approach to interlock three or more doors becomes infinitely more complex, especially when adding features for an alarm if the door is open too long, breach detection and lock dwell times.

UK company Hoyles Electronic Developments has developed expertise in the design and manufacture of door interlock controllers for a range of different applications. Its approach has been to use micro-controllers where the software takes care of all functions.

Airlocks fall into categories that can be variously described as supervised, unsupervised, secure or non-secure. In secure airlocks the doors remain locked and secure. It is usual to have some form of request to enter device, such as a push button for a supervised airlock where a viewing panel or CCTV verification system is employed. An unsupervised airlock may use a keypad or biometric reader as the request to enter device to maintain security. This type of interlock controller would be used, for example, in situations where only designated personnel are permitted. Hybrid systems can be used to give both secure and supervised operation where security is of paramount importance.

In a non-secure airlock, all doors remain unlocked. When a door is opened the other doors are then locked to maintain airlock integrity. This type of interlock is often employed in cleanroom environments.

In essential part of any airlock system is the door-locking device. The choice will depend on the type of doors and the level of security. Electric door strikes are available from as little as a few pounds but, as in most things in life, you get what you pay for. Other possibilities are mag-locks and sheer locks.

Some interlocks necessitate the use of electric door operators, roller shutters or even security bollards and gates. Hoyles interlocking software is designed to cope with all these possibilities. Door status indication can be provided by the use of controllers. This ensures that users of the airlock always understand what state the airlock is in assisting their unhindered use of the system.

Accurate monitoring of door status is essential and equipment is available that can make accurate use of whatever door sensors are required. Conventional magnetic door contacts as well as monitored electronic locks are catered for. Hoyles interlock controllers, for example, include breach alarm, door open too long alarms, adjustable dwell times for locks and door status indication facilities. Some interlocks include power supplies for locking devices and fire alarm inputs to automatically release doors in the event of a fire. The company also supplies biometric readers for request to enter devices.

A recent development now being offered by the company is a shared facility interlock controller. This provides a cost-effective way of allowing one facility, for example a bathroom or toilet, to be shared via separate doors from two different areas. It is primarily intended for use in residential homes and hospitals, where it is possible to make considerable saving on space and the cost of providing en-suite bathroom facilities for each user.

The controller, along with its peripheral equipment, ensures that security cannot be breached, privacy is maintained and the facility being shared is available for use by either user immediately after use. It is just not possible to pass through from one area to the other. Users can return only to the area from which they came. Comprehensive features include assistance call, anti-hogging alert, and generating alerts for running water and consumables.

Interlock controllers have become standard equipment across many sectors, and com-panies such as Hoyles are ready to answer the even seemingly unresolvable problems associated with airlocks and access control.