Buffer area and its applications in clean room 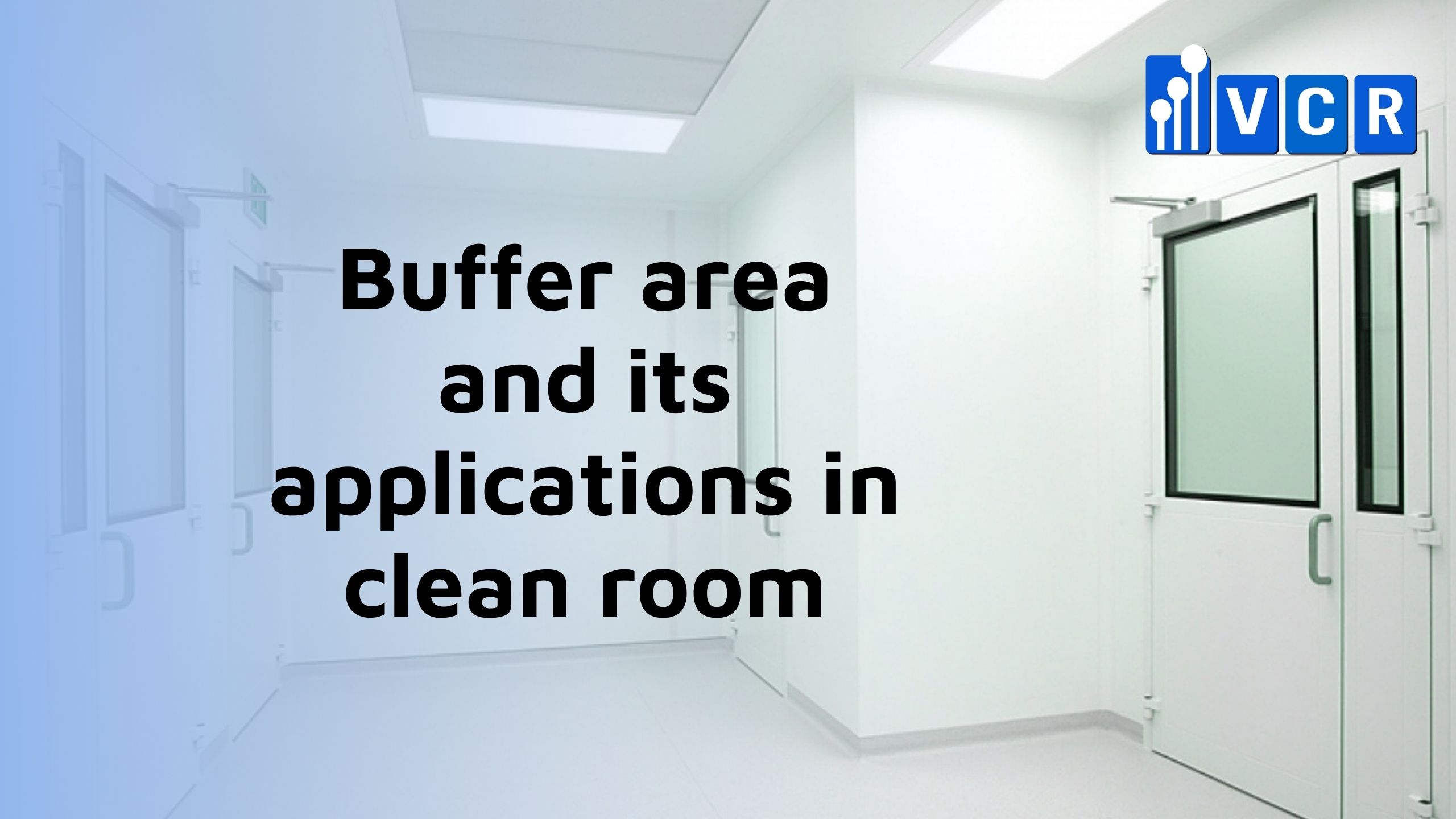 To maintain cleanliness level, cleanrooms need a large amount of equipment and supporting tools. And one of the special elements that we need to know when building a cleanroom is a buffer room. What is a buffer room and how is it applied in clean area? Let's find out!

+ A buffer room is a sterile area that lies between non-cleanrooms and cleanrooms, ensuring proper personnel entrance and reducing cross-contamination.

The differential pressure should be maintained between 10~20 pascals. HVAC system helps to maintain the pressure and the air quality of the area.

In the buffer room, doors cannot be opened at the same time. We can open the door when the other door is forcedly closed (due to the interlock system).

+ The buffer room is a compounding area. Its function is to prevent particles and pollutants from penetrating into the cleanroom.

+ If their classifications of two cleanrooms are too different, they cannot share a buffer room.

+ The negative pressure isolation room is composed of two parts: the buffer room and the main cleanroom.

The buffer room is a small room located between the corridor and the main isolation room.

The air from outside will pass through this room, and go into the negative pressure isolation room, then escape through the air filtration system.

+ People entering the negative pressure isolation room, such as medical staff, must go through a buffer room.

In this room, they will wear protective clothing, hoods, masks, gloves and shoes.

This ensures that the isolation room is kept free of contamination, helping to minimize the contact of healthy people with the patient's secretions such as saliva, nasal discharge, or droplets from coughs and sneezes.

Then, to ensure the unidirectional principle, the medical staff and the patient's family will leave the main cleanroom through a second buffer room.

Medical equipment and protective clothing will be removed and disposed of according to regulatory standards. 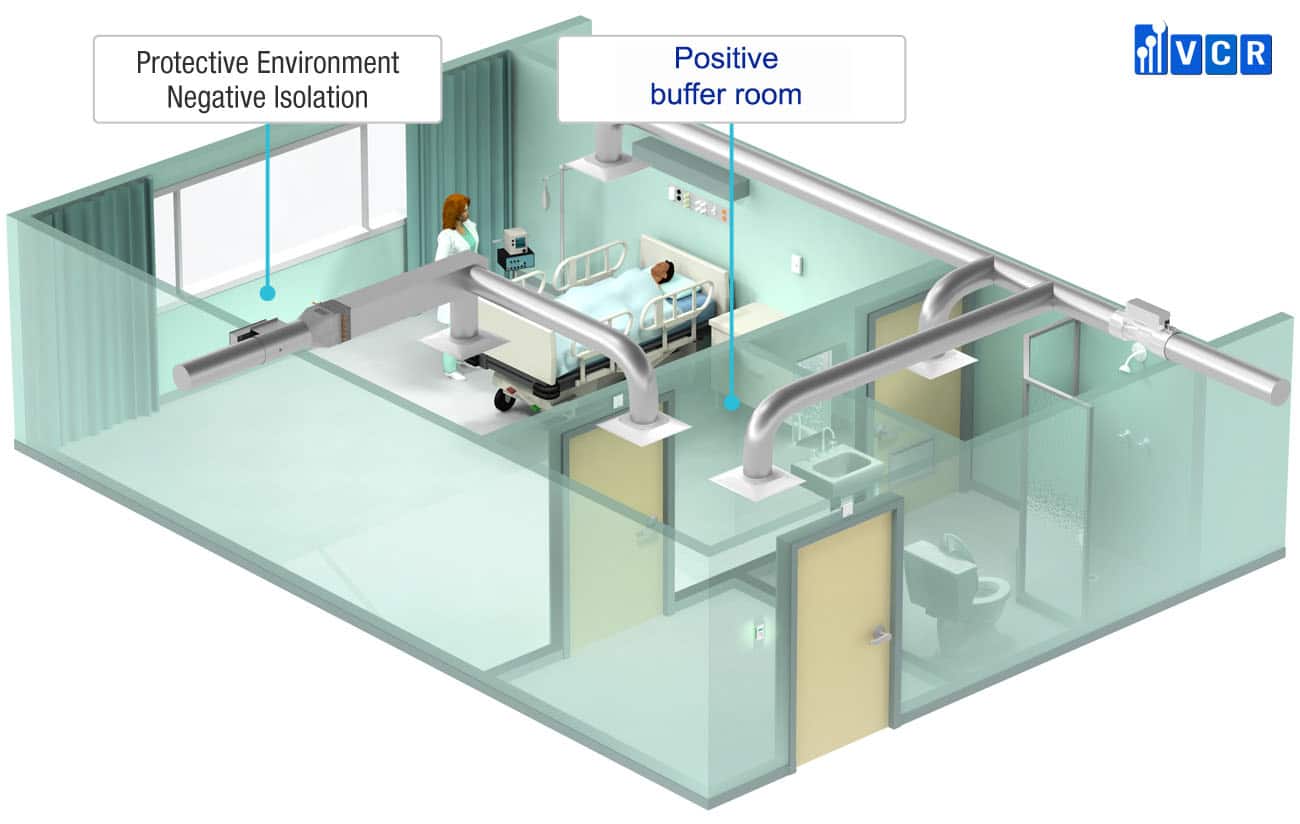 + There is no need to arrange a buffer room between clean rooms that are separated by a level.

According to theoretical calculations, the pollution entering when opening the door does not increase if the dust concentration in the room is no more than 120% and the door is opened for less than 2 minutes.

+ Between clean rooms having a difference between two levels of cleanliness, designing a buffer room should be considered comprehensively depending on the specific situations.

If self-cleaning time is considered to be acceptable or does not affect the experiment or production. In this case, it is not necessary to design a buffer room.

4. The importance of interlock in buffer room

The purpose of using the buffer room is to prevent cross-contamination of the cleanroom.

Therefore, besides creating clean air for this room, the buffer room must adopt an interlock system.

Interlock is a special lock that is used for access control of 2 doors at the same time to prevent cross-contamination between cleanrooms of different cleanliness levels. When a door is open, the other doors are automatically locked.

5. The difference between buffer room and airlock

In fact, there is still a big difference between the airlock and the buffer room.

+ The most important function of the airlock is to prevent the flow of air between adjacent rooms or environments, thereby effectively reducing "cross-contamination".

To prevent the egress of particles, the air pressure in the airlock room must be negative relative to the neighboring environment.

+ The buffer room is placed between the unclean area and the clean area.

The pressure from the unclean area to the buffer room to clean area varies from low to high.

An airlock is a kind of buffer room. The buffer room has a clean air system, and the airlock does not.