China and WHO authorities agreed that further studies on the severity and transmissibility of the virus are needed and immediate communication of any findings is crucial.

Coronavirus, the novel respiratory infection that first appear in China late last year, has reached a death toll of more than 300 people, yet the total number of confirmed cases at the time of going to press stands at over 13,000 globally. The outbreak is now been declared a global health emergency by the WHO.

Without strict containment measures the disease will jump from human to human outside of “ground zero” in China. This has been observed in three countries said Director-General of the WHO, Dr Tedros Adhanom Ghebreyesus, on Twitter. With large parts of China on absolute lockdown and BA cancelling all flight to mainland China, this is a critical tipping point of the outbreak.

Multiple companies worldwide are now racing to develop diagnostics and treatments for the new virus. China itself has also finished hospital builds in record time to treat and contain the mounting number of infected. 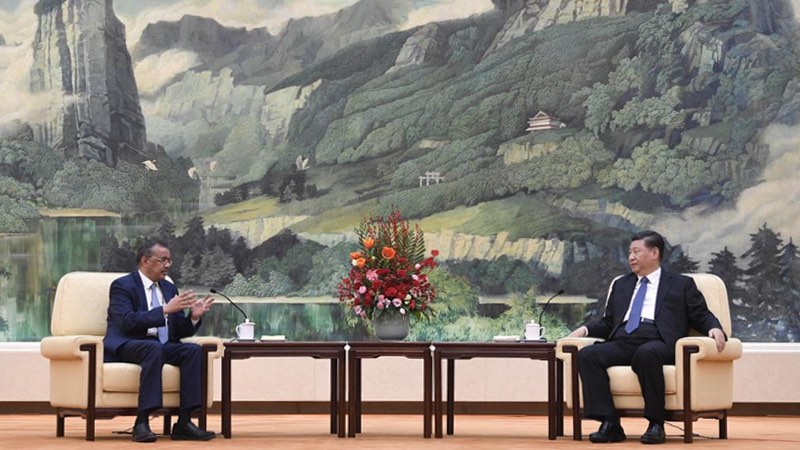 Dr Ghebreyesus had met with President Xi Jinping of the People’s Republic of China in Beijing and discussed the latest developments in the novel coronavirus 2019 (2019-nCoV) outbreak. Representatives for the WHO and China were also in attendance.

Containment measures in Wuhan and further afield were the main theme of the talks. Both WHO and China also noted that the number of cases being reported, including those outside China, is deeply concerning.

It was agreed by President Jinping and Dr Ghebreyesus that in order to optimise the containment efforts, further studies on the severity and transmissibility of the virus would need to be conducted. Following this, any and all data should be quickly communicated, and China should share biological material with the WHO.

Due to the fast-spreading nature of the virus, it is still unconfirmed the exact PPE required for treating and handling patients.

“We appreciate the seriousness with which China is taking this outbreak, especially the commitment from top leadership, and the transparency they have demonstrated, including sharing data and genetic sequence of the virus. WHO is working closely with the government on measures to understand the virus and limit transmission,” Ghebreyesus said.

In the interim, the WHO has advised to avoid unprotected close contact with anyone developing cold or flu-like symptoms and to seek care if you have a fever, cough and difficulty breathing.

Internationally, multiple sources reported on a twitter video showing a man in the UK being escorted to an ambulance by a medic in a hazmat suit. However, the two other people involved were only in face masks. Concern has been expressed from many about the disparity in protection measures.

Outbreaks such as these are a huge financial burden to a country and the expenses can quickly wrack up. For example, the cost of a full protective suit, according to OCHA, is US$61.48. But there is also the logistics of getting access to PPE, such as hazmat suits.

Much remains to be understood about 2019-nCoV. The source of the outbreak and the extent to which it has spread in China are not yet known. While the current understanding of the disease remains limited, most cases reported to date have been milder, with only around 20% of those infected experiencing severe illness.

With the WHO meeting again to reevaluate whether the current outbreak constitutes a public health emergency of international concern, it remains to see the scale and trajectory of this outbreak.

Companies providing PPE services and those developing diagnostics and treatments should be prepared, access to these essentials might be needed in any location across the world wherever the next outbreak pops up.