The European Chamber of Commerce in Việt Nam (Eurocham) highly values the potential of Việt Nam to become a centre for the research-based pharmaceutical industry including production, export and supplies of high quality healthcare services in the ASEAN region.

Pharma Group (PG) – the Pharmaceutical Sector Committee of EuroCham, which represents the voice of the international research-based pharmaceutical industry in the country – said Việt Nam has many advantages in the sector thanks to its population of 95 million, stable political climate and trained human resources. In addition, it is the gateway to ASEAN countries. 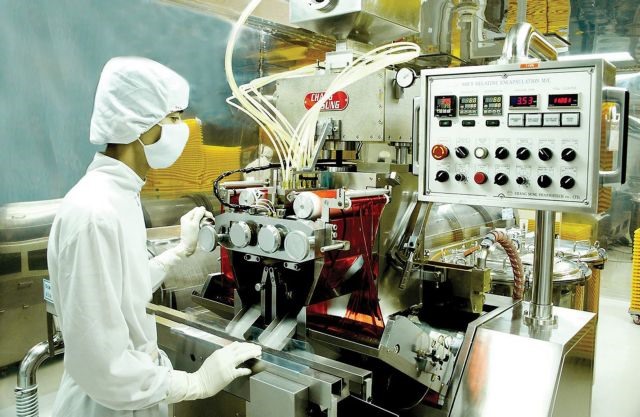 An engineer works on a machine in DHG Pharmaceutical Co's drug manufacturing plant in Cần Thơ City. A Eurocham report predicts the healthcare sector can become an industry which can promote innovation and creation in Việt Nam

Việt Nam wants to clearly see the transition from production to innovation, research and development, services and e-healthcare, PG said.

The healthcare sector has become an industry which can promote innovation and creation. In which, research-based pharmaceutical companies would provide the main momentum.

Research from PG showed that Việt Nam has the ability to reach a higher position in the value chain of the science and life sector in comparison with other countries in the ASEAN region.

To fully tap this potential, Eurocham suggested foreign companies operating in the sector receive support from the Government, the Ministry of Health and other relevant ministries.

It said that foreign investors supported Decree 155, which has made many positive changes towards cutting procedures, thus creating favourable conditions for businesses in tenders and drug imports. However, they expect to have more dialogues relating to new requirements on certificates of pharmaceutical products (CPP).

Accordingly, they need formal dialogues between pharmaceutical management agencies and the Ministry of Health to have formal responses relating to the feasibility of new requirements on CPP in Việt Nam.

In addition, the ministry and businesses should conduct meetings to seek solutions on the quality of traceability of pharmaceutical products.

With the Government’s new policies, it is forecast that more foreign companies will enter the Vietnamese market to enjoy the country’s growing medicine demands.

The ministry’s data showed that the country’s drug imports last year increased by 8.8 per cent year-on-year to US$3.7 billion, reflecting growing local demand.

The Vietnamese drug market posted turnover of $5.2 billion in 2017, according to data from Business Monitor International. This is up about 10 per cent year-on-year and is expected to continue double-digit growth over the next five years.

Việt Nam’s drug spending per capita rose by 10.6 per cent on-year to about $53.5 in 2018, and is forecast to rise further in the near future, the ministry said.