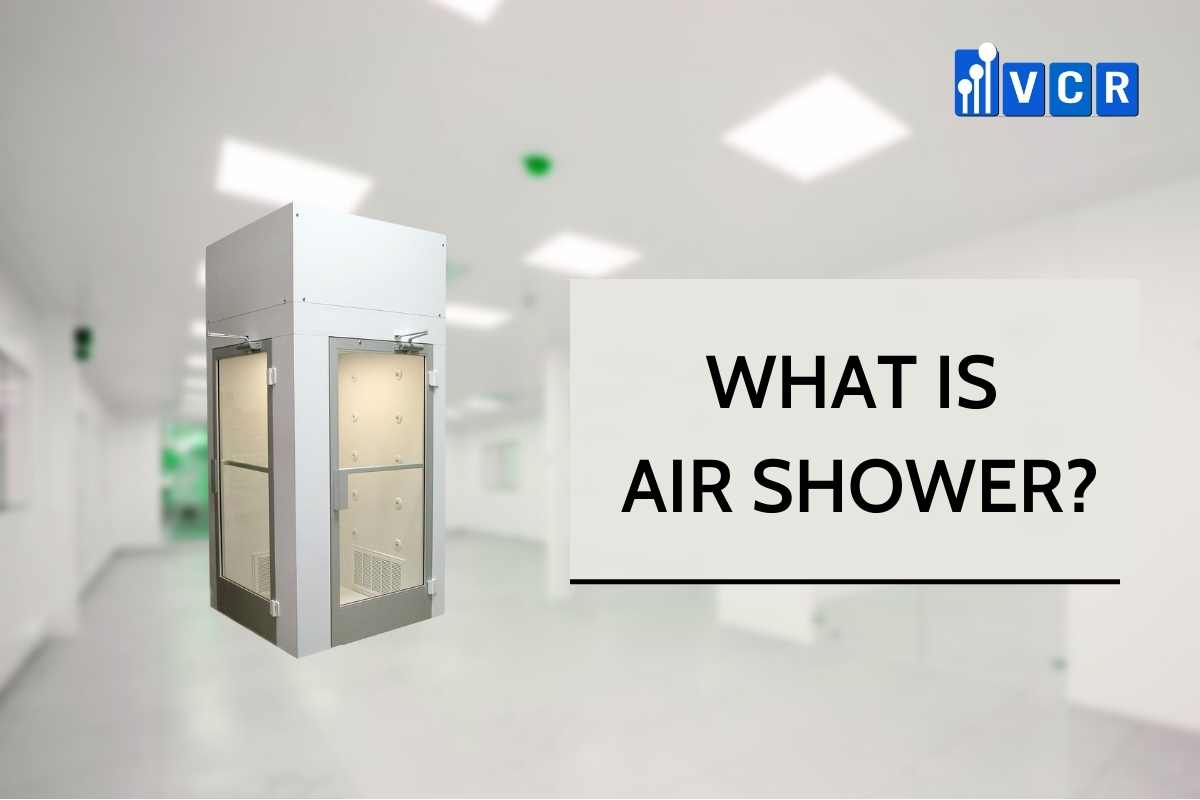 Air shower is a specialized chamber that works as an entryway to the cleanroom to keep the cleanroom uncontaminated. It employs high pressure and high-velocity HEPA-filtered air to dislodge and remove particles from surfaces of personnel and products before they enter cleanroom.

Air shower is installed between cleanroom and non-cleanroom. Normally, air showers are put between a gowning room and a cleanroom. After personnel wears cleanroom clothing, they enter the air shower so that the air dislodges any residual from clothing.

Some air showers are placed between cleanrooms of different cleanliness classes.

2. The history of cleanroom air shower

The first air shower was launched in 1892. At that time, the US Department of Defense tried and failed many times in the development of high-precision equipment. It was detected that the production environment contained particulate matter, resulting in inaccuracy. Finally, the first cleanroom and the first air shower were designed by several relevant departments to overcome particle contamination.

Since the invention of the cleanroom and air shower, all walks of life have continuously made new breakthroughs in a cleanroom in order to improve their competitiveness.

For more than 200 years, air shower has been widely used. It is used in cleanrooms with high/medium/low requirements. The air shower has also been included in the required equipment by international multi-industry standards (QS, GMP, ISO, etc.).

In recent years, the air shower has become more and more developed. In particular, the voice prompts of the intelligent voice air shower can let people complete the blowing and dust removal process in an orderly manner.

The purification effect is upgraded, especially the clean fluid filtered by the filter can be sprayed from all directions by rotating the nozzle. The particles are filtered through the high-efficiency filter and then circulated to the air shower.

3. Why do we need a cleanroom air shower?

Cleanroom is an environment where parameters such as cleanliness, pressure, humidity, etc are strictly controlled.

Even a small number of particles can lead to poor working performance inside cleanroom. For example, pharmaceuticals produced in cleanrooms can be damaged if the cleanroom is contaminated by too much particulate.

That’s why we need a cleanroom air shower. Air shower helps workers get rid of harmful contaminants on their clothing before entering the cleanroom. 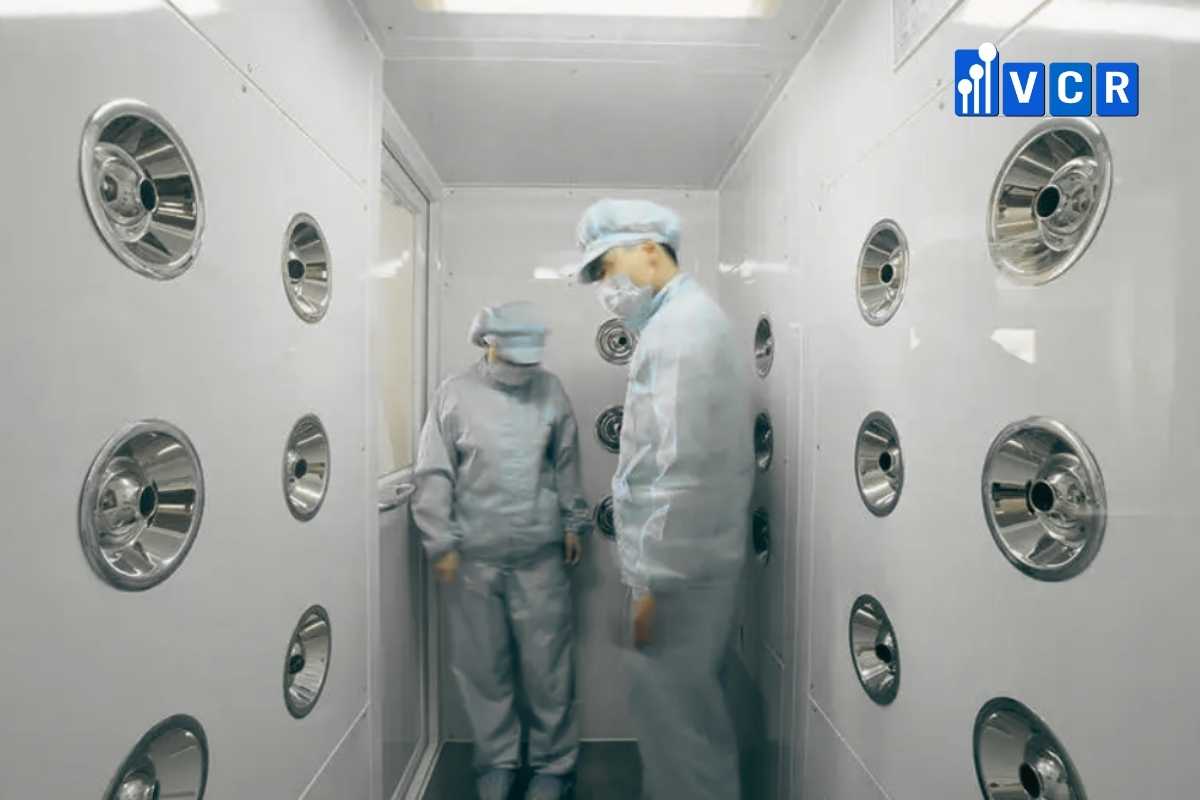 It is used to remove particles larger than 0.3 microns from personnel during the process of entering a high-class cleanroom from a low-class clean room, so as to prevent people from bringing contamination after entering the cleanroom.

The air shower also plays the role of airflow buffer room. When opening the door, there is airflow. The air shower with a positive pressure design can stop the air from low-class cleanroom or non-cleanroom flow inside the air shower, which can avoid air contamination.

A cleanroom air shower is an isolated chamber with a self-contained blower and motor. When a worker enters the chamber, the blower turns on. With dual interlocked doors, the room is like an airlock.

And how does an air shower work?

The worker enters an air shower from the gowning room or non-cleanroom. The door is automatically locked. Then, the air shower starts blowing air with high velocity. The air streams scrub off the particles. After a total of about 10-20 seconds of this process, the second door unlocks, and the worker steps outside to the cleanroom.

The effectiveness of an air shower relates directly to its proper design and use. Many recent tests conducted show that air shower is 35 to 90 percent effective in contamination removal.

According to many tests of the League of Nations, particles larger than 0.3 microns can be taken away by 99.999% at this velocity, so the air velocity should not be lower than 25 m/s in the international standard.

Body: The casing is made of powder-coated cold-rolled steel or stainless steel. The chamber is usually made of stainless steel SUS304. The thickness is 1.0mm

Door: Doors are equipped with an interlock system and a high-quality door closer

Blower: 2 blowers for large air volume air shower on both sides, equipped with 18 stainless steel nozzles, power: 0.55KW/unit, to ensure the shower effect. The air velocity is around ≥22-25 m/s 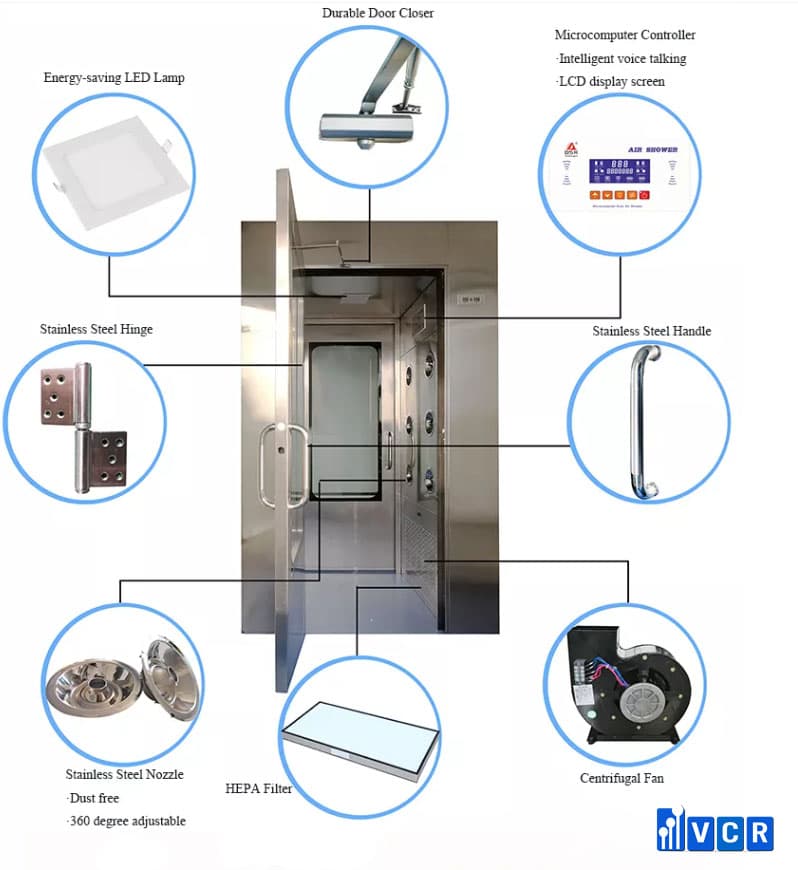 8. How to choose the right cleanroom air shower

There are the following factors you should consider when selecting an air shower:

- A modular air shower is recommended because it is easy to configure, ship, and install.
- The air shower should be made of stainless steel as it is easy to clean and chemical resistant
- The blowers should supply a high volume of air. Pre-filter and HEPA filters should be used in the filter system for excellent filtering results.
-  Air nozzles should be adjustable and evenly-spaced